Posted on February 21, 2017 by dutkiewiczarchive 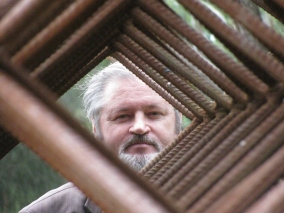 Adam Jan Dutkiewicz was born in Adelaide in 1956. He matriculated at Adelaide
Boys’ High School then went on an extended gap year during which he attended
the “university of life”. In the early-mid 1980s he studied Creative Writing,
Printmaking, Drawing and Painting at Hartley CAE and Communications
Studies as it transitioned to the Magill campus of the University of South
Australia. During this time he was managing editor and publisher of Words And
Visions (arts showcase) magazine, which became WAV Publications, producing
18 issues of the magazine and several books of fiction and poetry by mostly
South Australian writers. In 1986 he co-edited The Land of Ideas, a collection of
short stories for children, with Pauline Wardleworth; and in the following year
edited Tales from Corytella, the collected stories of Flexmore Hudson, his old
English teacher at high school. He worked as an assistant to Professor Ian Forbes
on the history of the Queen Victoria Hospital in 1987.

In 1990 he travelled overseas, absorbing art and theatre. Upon his return he completed his Honours year, working with Dr Catherine Speck. In 1991–92 he worked as an assistant to Dr Stephanie Schrapel and designer Katherine Sproul on the historic A Brush with the Stage exhibition, in conjunction with the Performing Arts Collection. In October 1992 he held his first major solo exhibition at RSASA and was elected Fellow and shortly thereafter President of the society.

During his time as President he oversaw the production of a number of historic exhibitions, including surveys for Jacqueline Hick, Francis Roy Thompson, Wladyslaw Dutkiewicz, the first of two survey exhibitions by visiting Chinese master artist Fu Hua, Rita Hall and the society’s Sketch Club. He also edited and produced Kalori, the society’s journal. During his presidency membership grew and he pursued an agenda of eclecticism, elevated professionalism and modernisation of the society (he brought computers into the RSASA office) and its membership, which met with considerable resistance. His term received support from Quit (later Foundation SA), which promoted a healthy, non-smoking lifestyle, so he was able to publish an extensive array of catalogues
with most of the aforementioned and other society exhibitions. He exhibited the first example of digital art shown in the society. His dedicated and hard-working Secretaries were Jan Howser, Donna West Brett and Maria Maiorano. His Council were supportive and appreciative of his long hours and total commitment.

From June 1992 until November 2005 he worked as freelance art critic for The Advertiser newspaper and has also worked for Business Review Weekly, Art Monthly Australia online and The Independent Weekly (2006–08). He also curated several exhibitions of work by his father and other family members, and an exhibition on Polish-Australian artists for Polart at Adelaide Festival Centre.

In 1997 he was awarded a scholarship by the University of South Australia to undertake a doctoral degree at the South Australian School of Art in visual art history and theory. His thesis was essentially a history of abstract painting in Australia. He is the author of numerous catalogue essays and monographs, including on his father and uncle and other post-war, South Australian émigré artists and architects, and was a state editor and writer for Australian Modern Design, published in Brisbane. His photographic essay of the salt fields at Dry Creek, The Path to Salt was published in 2012; after which he produced a full biography on his late father, Wladyslaw Dutkiewicz: A Partisan for Art; Francis Roy Thompson: Painter of Grace & Rebellion (2014) with Carrick Hill; and Abstract Photography: Re-evaluating Visual Poetics in Australian Modernism and Contemporary Practice, with photographer Gary Sauer-Thompson.

Since 2011 he has pursued photography as his principal artistic medium. In 2014-15 he tutored at the SA School of Art and at the School of Communications at University of SA. Since then he was commissioned to produce A Visual History: the Royal SA Society of Arts, 1856-2016 (two volumes); a monograph on local sculptor Andrew Steiner (see Moon Arrow Press for entry); and a small monograph on the artist Doreen Goodchild, with her daughter Judith Brooks. In 2018-19 he presented two retrospective exhibitions of his late father Wladyslaw Dutkiewicz’s work to celebrate the 100th anniversary of his birth, at Murray Bridge Regional Gallery (for the History Festival) then at the Royal SA Society of Arts (where he had held many of his early exhibitions and been a member of Council and Selection Committee). Adam is currently collaborating with Gary Sauer-Thompson on a second book project on Adelaide art photography.