A Visual History: the Royal South Australian Society of Arts 1856-2016

Posted on April 4, 2016 by dutkiewiczarchive 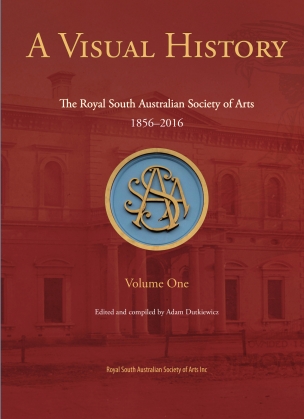 Front cover, A Visual History: The Royal South Australian Society of Arts, 1856-2016, Volume One, compiled and edited by Adam Dutkiewicz

Volume Two will be produced in 2017

The South Australian Society of Arts was founded in October 1856, incorporated in 1894, and received its Royal charter in 1935 for the state’s centenary in 1936. Its aims were  the promotion of the arts, not only painting, photography, and sculpture but also of architecture, decorative design, and decorative and applied arts; and through loans, competitive exhibitions, lectures and the formation of an art library.

It presented Annual Exhibitions, initially in locations such as the Legislative Council and the Adelaide Town Hall. In 1861 the South Australian Institute, formed to house a host of affiliated cultural bodies, provided rooms for the Society in a new building on North Terrace. For some time the Society concentrated on establishing a school of art and design and founding a national gallery.  The South Australian School of Art (previously School of Design and later SA School of Arts & Crafts) began in its rooms in the Institute and after 1871 it became difficult to secure an adequate venue to house the volume of art work for its annual exhibitions. The National Gallery held its first exhibition in 1881. In 1884 the Society was recognised by Parliament and affiliated to the Public Library,  Museum and Art Gallery of South Australia by Act No. 296.

With its focus on areas other than exhibitions, the Society suffered criticism in the press but received continuing support from government. With membership dwindling, the Society was regenerated by a band of dedicated members, including the Chief Justice, Sir Samuel Way, who had from time to time served as President when Acting Governor of the colony, and the newly appointed Director of the School of Design, Harry Pelling Gill, who was a Vice-President. This core group established a cooperative council comprised of artists, architects, accountants and businessmen who set about rejuvenating the Society, and it held its first annual exhibition for some years in the top lit rooms in the Institute in 1893 (the School of Art having relocated to the Exhibition Building). It published a significant, illustrated catalogue to accompany the exhibition.

The Society had formal affiliations with the South Australian Photographic Society and the SA Institute of Architects. It hosted the annual exhibitions of the spin-off society, the Adelaide Easel Club, founded by a small band of disaffected senior artists, including the brothers William Wadham and Alfred Sinclair (Wadham), Hans Heysen, Hayley Lever, Rose Macpherson (Margaret Preston) before the Society’s renewal, in 1892. It lasted until 1901, when it was amalgamated with the senior society once again.

In 1898 the Society expanded its exhibition programme to include the Federal exhibitions, formed with funds from the bequest of Thomas Elder in order to provide the means by which pictures could be acquired from artists across the colonies to form the core of an Australian collection for the National Gallery. The Federal Exhibitions ran until 1923, at which time it was decided they had fulfilled the intended purpose.

New rooms and a permanent gallery were added in a north wing to the Institute Building, opening in 1907; the Society still occupies these rooms and presents regular exhibitions in the gallery. In the 1920s the Society began to show more and more solo exhibitions by its star artists, and helped to launch the careers of ambitious young painters and etchers; people like Hans and Nora Heysen, Gustave Barnes, Leslie Wilkie, Will Ashton, Hayley Lever and d’Auvergne Boxall, Allan Glover, Fred Millward Grey,  Joseph Goodhart, Marie Tuck, Dorrit Black, Horace Trenerry  and Max Ragless all showed solo exhibitions.

In the 1930s it promoted the Arunta watercolour painters, and was one of the first galleries in Adelaide to present work by the Papunya Tula painters in the 1970s and 80s. It gave birth to the Contemporary Arts Society in the early 1940s, through its junior, more modernist inclined members, and continued to show its annual and major exhibitions until it secured its own premises in 1964. It hosted annual exhibitions of the Adelaide Camera Club well into the 1950s, as well.

The Society was a base and means by which many refugee and migrant artists were able to build their careers in Adelaide after the Second World War. Artists like Dusan and Voitre Marek, Wladyslaw and Ludwik Dutkiewicz, Stan Ostoja-Kotkowski, Ieva Pocius, Alexander Sadlo, Stanislaus Rapotec, Lidia Groblicka and many others were Fellows of the Society and regular exhibitors in group, prize and in solo exhibitions. It has always accommodated potters, carvers, illustrators, photographers and creative and genre painters of all kinds.

It runs satellite groups, like the Sketch Club (est. 1923 by Henri van Raalte) and the Outdoor Painting Group. It maintains associations with other art societies and suburban groups, as well as formal affiliations with the Friends of the SA School of Art. It offers several prizes, including the Portrait Prize and Solar Art Prize exhibitions, as well as smaller prizes in its members exhibitions every year.

The first volume, which features the early history and officials of the Society, was released to coincide with the Society’s 160th anniversary celebrations in October 2016. It was available from the society in two editions: for $75 (deluxe paperback) or $50 (economy paperback) but is now sold out (Volume Two can still be reprinted under current permissions):